Removes the hair outside the panty line. A regular bikini wax is ideal for simple clean-up.

Removes all hair from front to back. A small strip or triangle can be left.

Removes the hair from the armpit area.

Removes the hair from the elbow down to the wrist.

Removes the hair from the shoulder to the wrist.

We no longer offer leg services, we are currently focusing on our specialty areas such as our Brazilian and underarms. We apologize for the inconvenience.

Removes hair from above, below and in-between the brows--includes shaping.

Removes the hair from the upper lip area only (chin treatments cover the lower lip area).

Removes the hair from the chin and under the jawline.

Removal of hair on the outside (visible) area of your ear.

Removal of hair inside the nostrils.

Removes the hair from jawline up to eyebrows.

Removes the hair from all areas of face and under the jawline (including nose and brows).

How Long does Hair Need to be for Sugaring?

Sugaring hair removal Salt Lake City can extract very short hairs. Typically, hot waxing requires you to have longer hair. With sugaring wax, your hair needs to be about 1/6 of an inch long. What that equates to is about 2 weeks of growth after your last shave. The first time is always the hardest, but sugaring can stunt the hair growth and it can thin your hair out. The second sugaring hair treatment will be half the time and half the hair. We apply the sugar past and pull with the hair follicle instead of against it. This greatly reduces irritation and ensures the whole hair is extracted to provide you with a longer time in between waxing appointments. If you keep up with your appointments, about every 4-5 weeks, your hair will remain thin, soft and easy to remove. Avoid spray tans or self-tanning until after your waxing appointment. 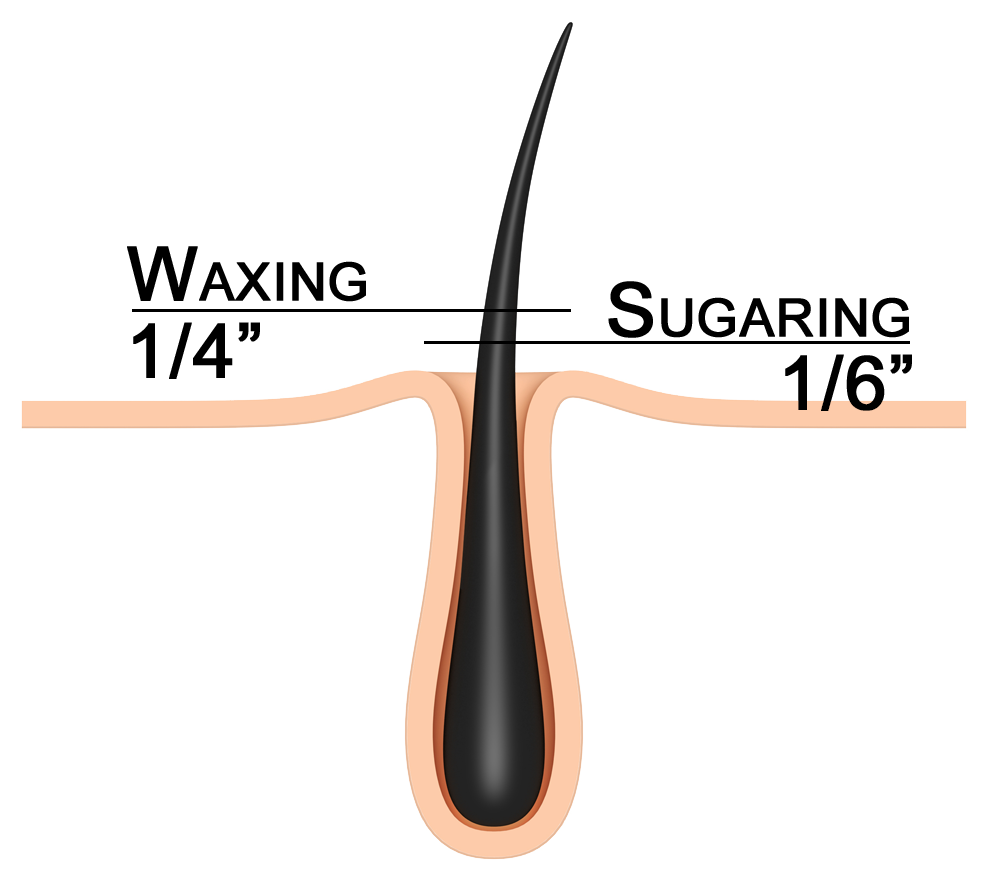 See how sugaring is done, and discover why people are making the switch from waxing to sugaring hair removal.

Have You Been Sugared Yet?

Advanced Body Sugaring Epilation offers numerous unique and diverse benefits. The most important advantage of sugaring is very fundamental: the Alexandria technique and sugar paste formulation extracts the hair in its natural direction of growth while the hair is still in the early growth stage (Anagen stage). This eliminates hair breakage, unnecessary discomfort, irritation and ingrown hairs while exfoliating dry skin cells.

Body sugaring is the preferred hair removal method over waxing for many reasons, most notably it is typically less painful or irritating to the skin than body wax. Below are more details and differences: